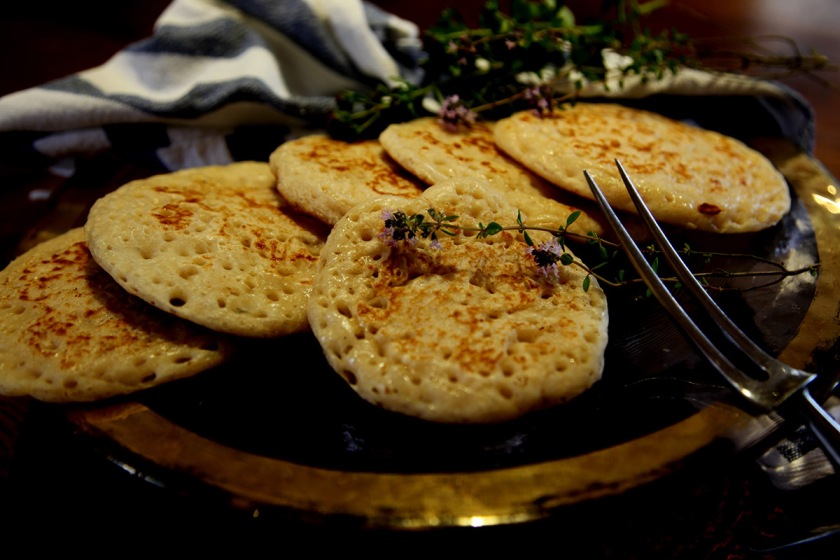 Pikelets are like slightly wild crumpets, unrestrained by their metal rings, they are the more edgy cousin of the crumpet and all the more sexy for it. Pikelets appear in various forms in probably most cultures, as drop-scones, griddle cakes, flat breads, pancakes, and so on. But pikelets are the English Midlands’ version. The “crumpet” itself is supposed to date back to Anglo-Saxon times with the first known reference to them being John Wycliffe who talks about the “crompid cake’. I suspect though that some version of this kind of food has been around since man discovered fire and flour. The secret to the light and spongy texture comes from the addition of yeast (I used instant dried yeast) to the batter, this creates the characteristic holes that appear on the surface as they cook and it is these that are perfect little receptacles for catching the melting butter that they are usually served with. Crumpets are traditionally cooked used a metal ring, Pikelets are made by just dropping the batter straight onto the griddle or hot pan.

Recipe
450g strong plain flour (as used in breadmaking)
350ml warm water
350ml warm milk
2 heaped teaspoons of yeast
3 level teaspoons of salt
1 teaspoon caster sugar
1 level teaspoon baking powder
A little vegetable oil for greasing the pan
Put the flour, dried yeast and sugar in a bowl, make a well in the middle and gradually pour in the water and milk. Stir together until you have a smooth creamy batter and then beat it well. Cover and leave in a warm place to rise (it will become very bubbly – indeed as the day I made this was so warm, mine bubbled and popped like a lake of molten lava, quite exciting).
Lightly grease a griddle or frying pan and place a medium to high heat. Add the salt and baking powder to the batter and whisk through. When the pan is hot, drop a generous tablespoon of batter on to the pan and cook for around 5 minutes. Lots of little holes should appear on the surface of the batter and once the surface is just setting, flip them over and cook for another couple of minutes until lightly browned. When cooked, set aside and keep warm as you cook the rest, or leave to cool and reheat in the toaster for later (or even better grab a toasting fork and open up the wood-burner!). Serve drenched in butter, you can go for a run tomorrow.