Love Italy, love Italian food (except gnocchi – just cannot get that stuff) and have had some amazing food on some fabulous holidays. I think I have visited probably 10 times, from the lakes in the North, to Rome, Tuscany and Venice, to Sorrento, Capri and Positano in the South, but never yet ventured to Sicily. So this year’s holiday was a first. 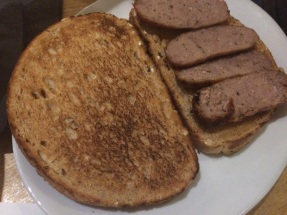 Before Sicily though we have Birmingham airport, and I just wanted to share this gem with you. This beaut is a “sausage bloomer sandwich” and it cost £7. Yep. I will leave that with you….

Taormina is perched halfway up a cliff and is truly beautiful, a wonderful old town with meandering ginnels, alleyways and streets, with ancient artefacts (the odd 2000 year old amphitheatre or mosaic) around every corner, mingling with characterful old buildings and all human life, particularly Italians, for whom this is favourite holiday resort.

The streets are packed with shops, restaurants and bars and the views from the cliff side over the med are stunning. Alongside the smaller antiquities there is also a truly fabulous Greek amphitheatre which was pretty much behind our hotel (Ariston – great location, great hotel, definitely recommend) with the sea and hills as its backdrop, where we watched the best of Bellini’s operas on a glorious evening. And of course there is the magnificent Mount Etna, smoking away gently in the background. 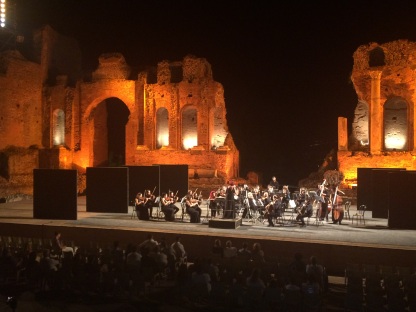 Sicily is famous for its blood oranges and is a major producer of  lemons, mandarins, aubergines (for the signature aubergine parmigiana) tomatoes, prickly pears, almonds, capers and pistachios. There is an abundance of tuna, swordfish, sardines (locally served stuffed with herbs) and shellfish and, of course, ricotta, pecorino and honey. The island also produces a huge variety of superb wines, (at a price). 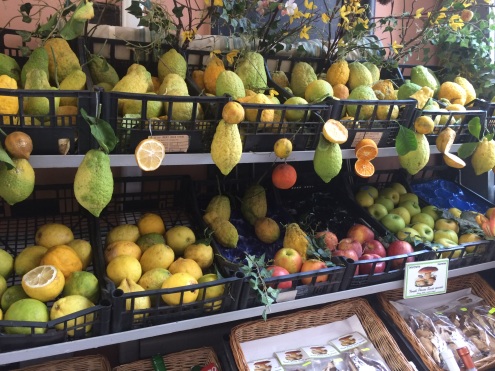 I will however, tell you that this is not a cheap place, especially for food and wine (and given my main reason to travel anywhere at all is for food and wine, this is a bit of a bugger). The cheapest wine we found in the shops was around £9 a bottle, in restaurants the prices were eye-watering.

I have never had a bad meal in all my visits to Italy (actually I tell a lie,  I did get served some rotten shellfish in a restaurant in the godforsaken resort of Lido de Jesolo which we stayed in for a visit to Venice and the islands of Murano and Burano. That place is a memory I have tried hard to suppress, the only good thing about it was the ferry out).

But for me, eating in Sicily was something of a curate’s egg. Apart from the fact that much of the food is excoriatingly expensive for what it is, pretty much every restaurant whether it had magnificent views overlooking the sea or was tucked away in a back street charge much the same (very high) prices. One would hate to suggest that there is something of a cartel going on here with food and drink? But there are clearly some influential “families” in the region… 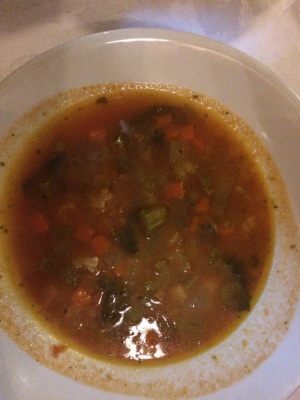 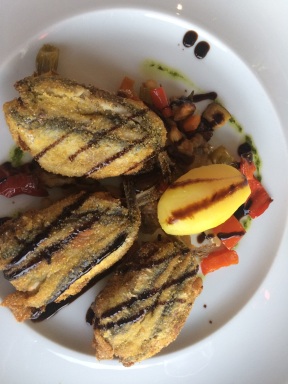 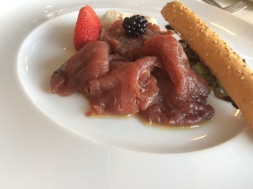 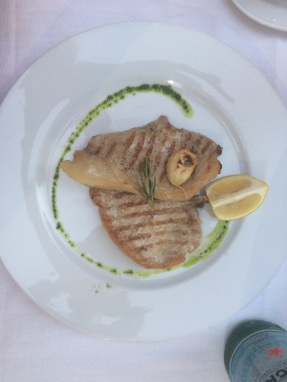 In any event, I wouldn’t have minded the prices so much if the food had been a bit special. But with a couple of exceptions it really wasn’t. Often not well presented (I don’t mind rustic but not when a place is supposed to be fine dining) and often not well cooked. See this grilled squid? Couldn’t get a knife through it. 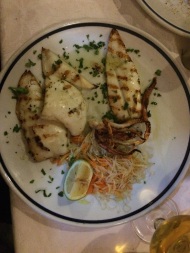 I even, and I kid you not, had some badly cooked spaghetti (it wasn’t al dente it was crunchy), I ate the vongole and ditched the pasta. And this gnocchi (not that I get this mushy potato dish at the best of times) was, well, judge for yourself. 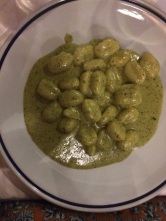 So there were some highlights, some great pizza served on tables clingy precariously to a narrow steep staircase,

fabulous ice- cream (you might scoff, how can it be anything other than fabulous in Italy you ask? but believe me, I was taking nothing for granted by this stage) 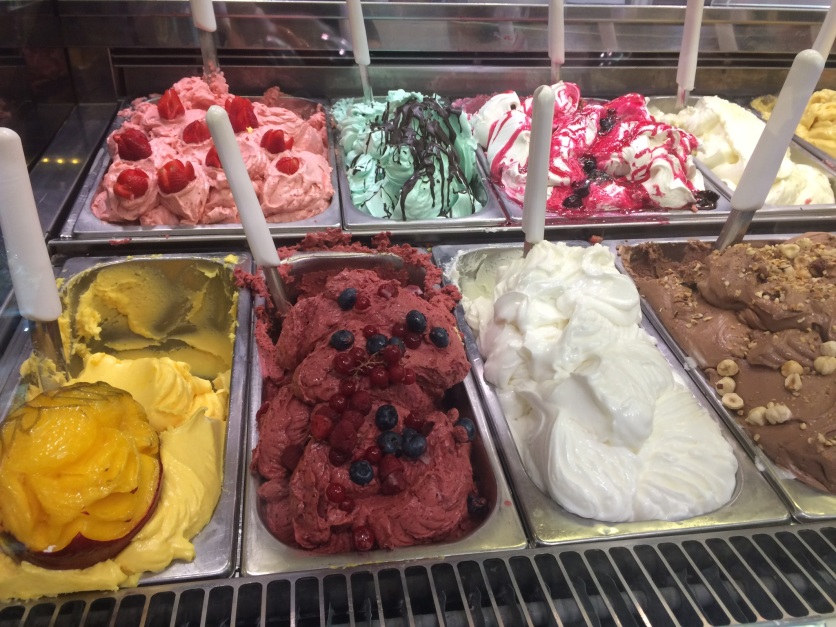 great cannoli, a lovely meal at Mama Rosa’s (which was a recommendation) and finally a trip up the hill to the very top  (you need to have a head for heights here, with the hairpin bends and sheer drops – and I don’t, made worse by the fact I was largely sober as the booze was so bloody expensive) and the lovely Castelmola. The food here was superb and slightly less expensive, so frankly a ten minute bus ride (even with your eyes closed as in my case) is worth it for some really good food and more astonishing views. 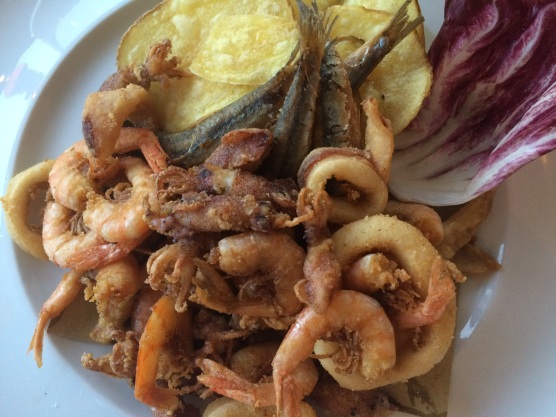 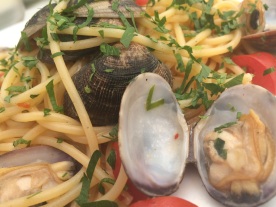 I also had some of the best bruschetta ever in a tiny, family-run bar with a stunning view of Etna (who produced a lava flow for our entertainment while we had a few beers).

When we arrived the mamma welcomed us and the pappa…. well, let say, he was a large, sweaty man in a vest who quite clearly did not wish to be there baking his own ciabattas in a tiny hot kitchen and I am guessing that he is rarely deployed front of house, if you get my drift. We ordered beer and the order was yelled at him from the mamma and he growled back some apparent obscenity (we were all occupying a space of about 3 square metres here). When he brought out, clearly very reluctantly, the bruschetta (not ordered but Italians do not like to serve drinks without some kind of food/snack it seems) and kind of growled something as he pretty much threw it on the table, we did notice he was perspiring rather heavily and had distinctly grubby nails, he also, rather worryingly, had breadcrumbs and crushed tomatoes clinging to his chin and top lip. 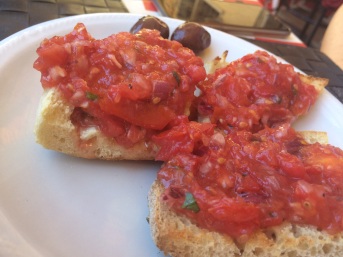 We looked long and hard at that bruschetta, considering ever so slightly the hygiene implications and then thought, sod it. It was, by a country mile, the best bruschetta I have ever eaten, and makes almost all other attempts seem inadequate. And, of course, we came to no harm and, honestly, if we had had more time I would have come back and eaten there every day, despite the fact that I never once saw either proprietor or proprietess wash their hands and the loo was basically in the kitchen and the flush was broken. To pappa’s clear relief the son eventually turned up, a charming and jovial chap, who took over front of house… 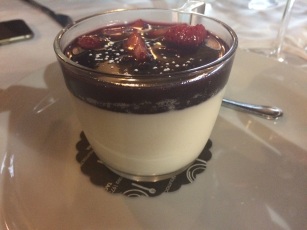 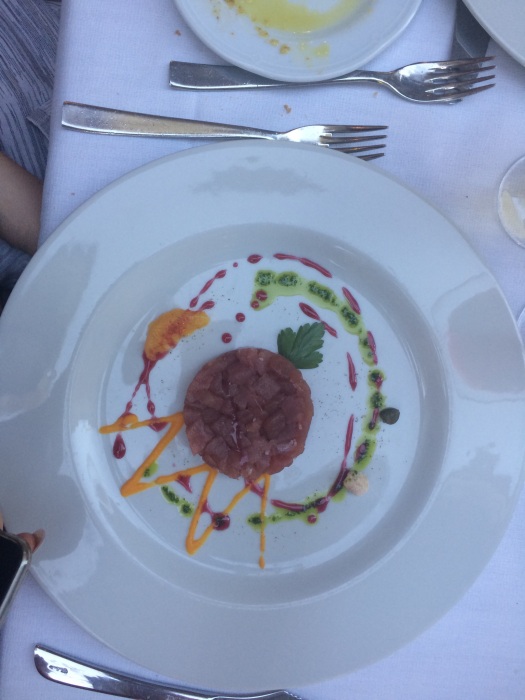 Love Sicily, love Taormina and we had a wonderful time, but finding some really good food was more of a challenge that I imagined, so I will have to go back and try again….

One more gem to share, this time from the fight home. This item is a called a “ham and cheese melt”. A delayed flight (storms over France) meant I was starving and so I recklessly ordered this microwaved monstrosity. It is essentially wet bread with some kind of cheese -like product on top.

And with that, I will say arrivederci.